Tried And Failed To Get Rid Of Stubborn Rust? Look No Further For The Solution That Really Works!

Quick Rust Off starts dissolving rust on contact. Absolutely no scrubbing is necessary, just apply the Quick Rust Off to any surface that has rust and you will see it disappear as you are watching. Items that can be soaked in our Quick Rust Off rust remover come out looking new, completely rust free in just a matter of minutes. Larger items may require a bit more time.

Around the home, Quick Rust Off rust remover can be used to keep tools looking and working like new. This is called “maintenance” and if you maintain an item that you bought it will last a long time and save you money because you do not have to replace it.

There are many other situations where Quick Rust Off is the perfect solution:

Car and truck owners can keep their vehicles looking like new by cleaning off any rust as soon as you see it materializing. Rust can show up on the wheels or rims of the vehicle, around the bumpers, on tow hitches, and around any dents or scratches. Under the hood, the engine can be kept looking new with the use of Rust Off.

Bike owners know that their bikes or their children’s bikes are always being attacked by rust. By soaking a bike chain, for example, in the Rust Off rust remover, you can make the chain not only look new but greatly improve the performance of the bike.

Hunters or gun owners can use it to clean the rust spots from guns, a big problem in the gun world.

Fisherman can clean their hooks and lures with Quick Rust Off before fishing. Rust is a major problem and other than replacing a fishing lure, simply soak it in Quick Rust Off for a new, clean surface.

Mechanics can soak the parts they remove while they are making the repair. As they replace the parts they will be clean and “rust free” as if they had bought new, making their work look even better.

Boat owners know that where a metal rail or screw meets the fiberglass there is often rust staining. Fishing gaff’s are always rusty, and boat owners are constantly battling rust, especially saltwater boats.

Painters see rust just about every day. Wouldn’t it be nice to just spray the Rust Off on and wipe the rust off? Of course, it would, especially when painting metal objects where there are always rust spots.

Property Management companies or contractors such as landscapers and pressure washers who take care of properties know that rust is everywhere. Where you find rust or iron stains caused by water sprinklers, Rust Off will remove the rust and iron stains instantly. Rust Off is a must have for anybody that takes care of a property.

No mixing just use full strength, spray Quick Rust Off on a rusty surface and wipe clean with a dry cloth or wash off. If soaking a rusty item, submerge it in a container of Quick Rust Off and you can watch the rust deposits break down and dissolve. Remove when rust is gone, usually within minutes, (items with heavy rust may need to soak longer, sometimes an hour or more), then remove and wipe dry. Always coat with a rust inhibiting lubricant to prevent recurrence unless you are painting.

Please note that mixing instructions are measured in U.S. gallons, so feel free to add more of the powder to your mix.

Watch Quick Rust Off in ACTION!

A number of months ago I asked you if the Rust Off would work on asphalt shingles. We tried it and yes it does remove it. We have a problem here where roofs are rust stained from furnace fumes coming up the chimney. It appears from the ground that the rust on the roof is actually coming from the Selkirk chimney but upon our inspection, there is rust on the high side of the chimney also and of course rust does not fall up from a services, just down. This is quite ugly on a roof especially if the chimney is at the front of the home. Imagine a $300,000.00 home with all its beauty and a rust stain. When IKO are testing it would make sense to try removing rust stains from the shingle. A huge market here.

Rust stains on a fiberglass dingy, no problem … Look what Quick Rust Off can do. 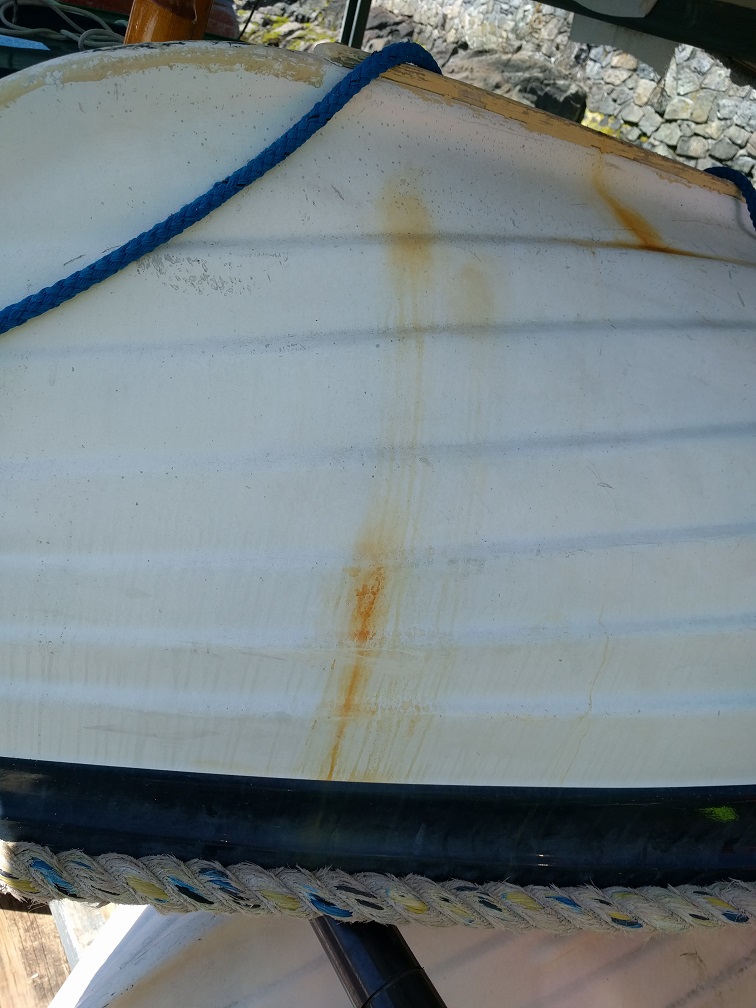 Before being sprayed with Quick Rust Off 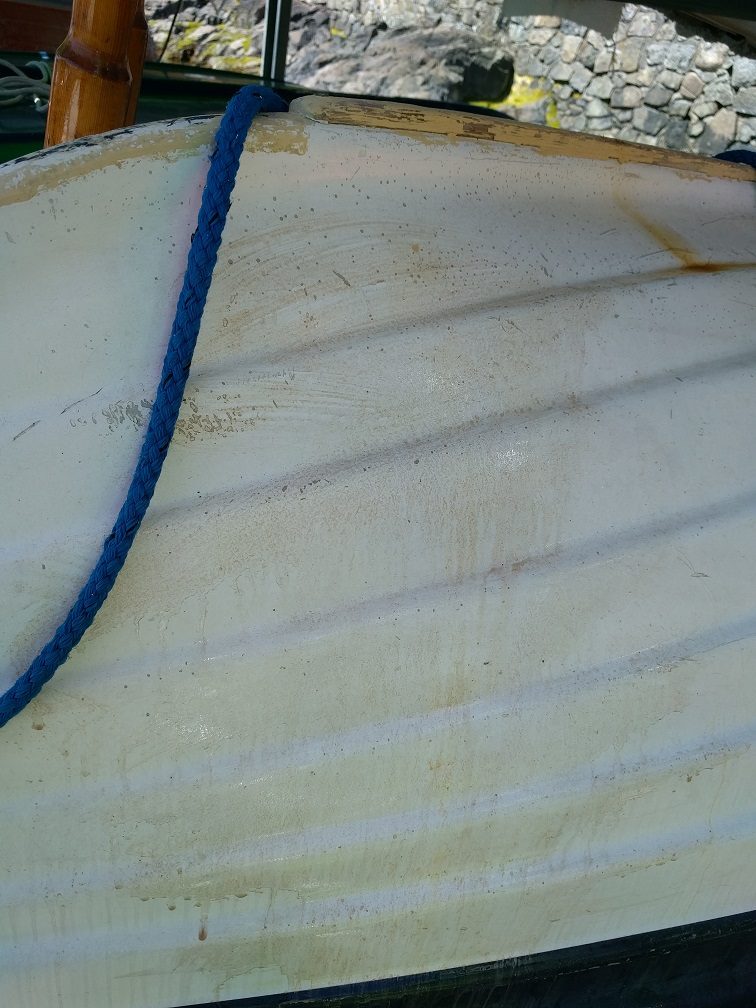 After spray, the Rust stains start to run off 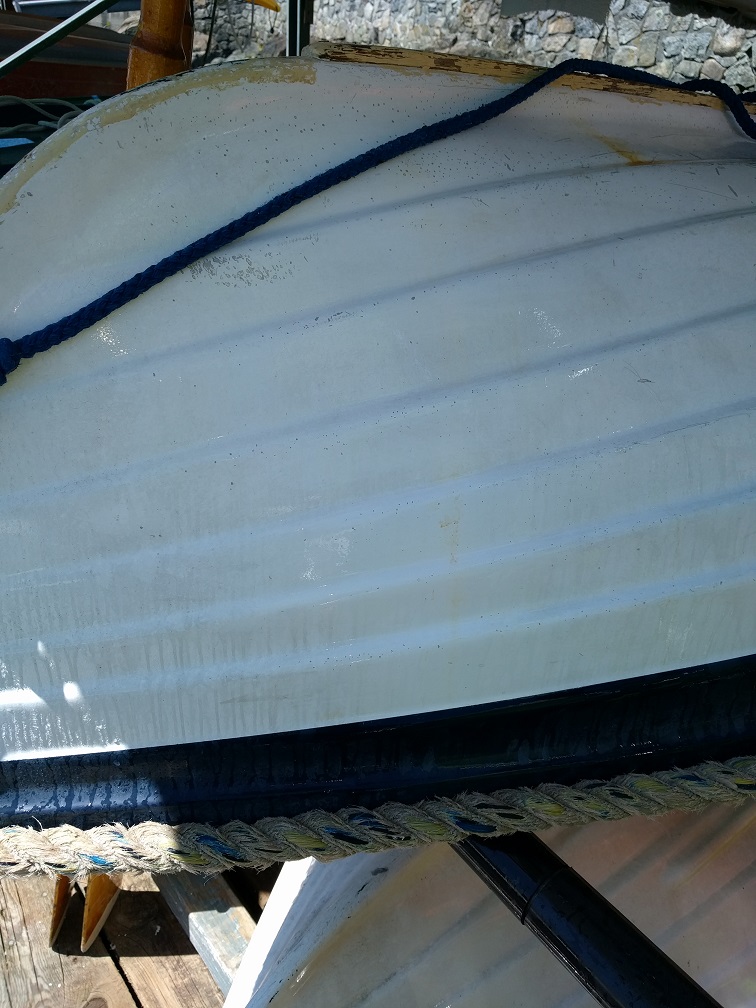 After a quick scrub with a stiff bristle brush and a rinse with a hose, the Rust has gone!! 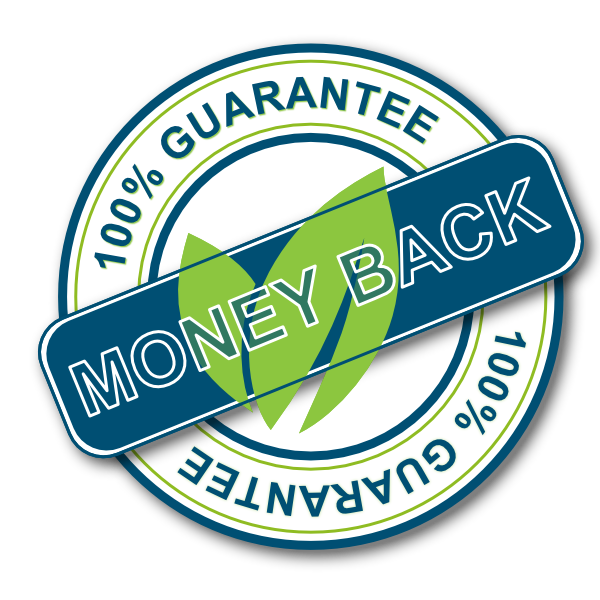 If for any reason you are unhappy with your results and you feel that a refund is warranted, simply return the product and the receipt and we will refund your money, no questions asked. This way you can order with confidence. We want you to be happy and to have a pleasant, stress free shopping experience. Our products work and work well…all you have to do is give them a try!